You know what pairs perfectly with the upcoming lunar holiday? Our stellar red sangria recipe, inspired by this month’s Wine Club picks.

So just what is a lunar eclipse, you ask? Basically, it’s when the earth moves between the sun and the moon, creating a shadow on the latter’s surface. And on the evening of July 27, we’re set to see the longest eclipse in a century!

Even cooler, this one will be a blood moon — a phenomenon that occurs when the eclipse casts a shadow and gives the moon a reddish, coppery color.

We’d say that calls for a celebration, or at least a little something to sip on while you take it all in. And we have the perfect cosmic red sangria recipe for you.

Watch it all come to life below. P.S. — we threw in a white wine version, too. Because let’s be honest, one is never enough.

Need some non-alcoholic accompaniments for your viewing party? These infused water concoctions are out of this world. How to Grill Pineapple (+some addictive toppings) 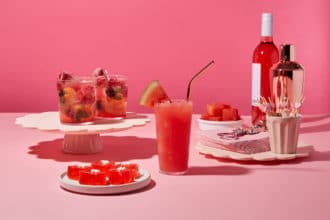 Quiz: Where do you fall on a scale of sipper to full-fledged wine-o?